Ice Fishing.   Ice fishermen inhabit the frozen surface of Lake Owen every winter. They start as soon as the ice is thick enough, usually after Christmas. But the ice may not be entirely safe until January.  Avoid Agnes Bay which has underwater springs that have hidden circles of thin ice, and the north end Owen’s narrows which the moving water creates thin ice at the narrowest point.  Some haul out fishing shacks or tent.  Most dress for the cold and drill their three holes per fisherman, using two holes for wind tip-ups and jig the third hole from a chair.  Light fishing line 8 pound test down to 4 pound test works best baited with small minnows with two small sinkers about a foot from the #10 or #12 treble hooks.  Fish just off the bottom. Old-timers like to  fish north of the Owen’s narrows in 10 to 20 feet of water from 3:00 p.m. to 8:00 p.m. with 4:00 p.m. to 5:00 p.m. best biting times.

Ice Caves of the Apostle Islands: The Ice caves are not accessible due to lack of safe ice in most years.  The Apostle Islands National Lakeshore has a recording on ice cave accessibility by calling the Ice Line at (715) 779-3397 – extension 3.  The Ice Caves were “discovered” in 2014 after a prime time national news story.  In 2014 more than 138,000 people visited the ice caves including news crews as far away as Australia and Japan to cover the spectacular ice formations.  Try to get there before 9:30 a.m. – 10:00 a.m. during the week for close in parking.  Put on some of those rubbers that have carbide tips that the ice fishermen use for some close up photography.   No snowshoes or skies needed as the crowds trample down the snow.

Cross Country Ski Racing: The Birkebeiner 50 kilometer cross country ski race is the North America’s biggest ski race and the Kortelopet Ski 28 Kilometer ski race is the second biggest. The start of the Birkebeiner is just 3 miles south of Lake Owen.  These races are held in the 2nd to the last Saturday in February.   North America’s largest cross country ski race draws an average of 35,000 skiers and spectators from all over the U.S. and world.  Register early as the race is usually full during the summer before the race: https://www.birkie.com/ski/events/birkie/

Snowmobiling: From Christmas to end of February, Bayfield County Wisconsin is the premier snowmobile destination in the Midwest with its over 600 miles of groomed snowmobile trails and the ever present lake effect enhanced snows.  Even in years where the snow fall is thin, the trails around Barnes, Wisconsin are usually the last to go bad.  For Trail Conditions: http://www.cable4fun.com/snowmobiling-report

Cross Country Skiing on groomed trails: Many thousands of cross country skiers come to the Lake Owen area to take advantage of all the groomed trails and plentiful snow. Grooming sometimes start as early as the middle of December last thru early March.  The best local groomed trails:

Bear Country in Drummond sells the Annual Pass that is good at the Drummond Ski Trail, Rock Lake Trail and others.  The $50 annual ski pass for the Birkebeiner and Kortelopet Trails are sold at Redbery Book Shop in Cable and the New Moon Ski shop in Hayward. 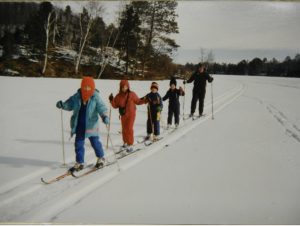 Cross country skiing on ungroomed trails:  From just past New Years Day until March, almost the entire Lake Owen is suitable for cross country skiing on the wider backcountry skis.  Avoid areas where cracks in the ice puts out a layer of water under the snow that results in a layer of slush on the ice. By February, under snow slush becomes a rare event.  Most of all stay out of Agnes Bay where underwater springs keep ice too thin and all too often those spots are covered with snow.  Also stay out of the Owens narrows where flowing water keeps a thin strip unfrozen in most years.   Experience teaches us that too often we overdress for the skiing.  Layer your clothing and avoid cotton clothes.  For temperatures down to 22 F, an uninsulated leather glove is all that is needed for the hands.  From 22 F. to 10 F., an insulated leather glove is needed.  Below 10 F. lobster gloves or mittens are needed.  A lightweight Balaclava is a good idea at temperatures down to 0 F. wind chill. 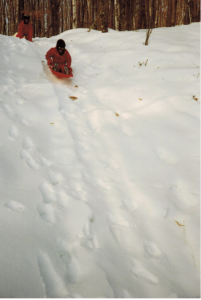 Sledding: Winter sledding around Lake Owen is wherever you can find a hill which is most of the shoreline.  You can use a classic steerable American Flyer sled on packed snow or a plastic Otter sled used by ice fishermen on less packed snow.