Several factors and/or lake characteristics contribute to the ability of zebra mussels to establish a viable population. These include levels of calcium in the water which mussels need for synthesizing the shell, a food base of algae, nutrients to sustain algae production, and the proper water chemistry such as pH levels conducive to mussel survival. The table below summarizes the findings of two studies which combined results from the literature (McComas et al, 2010). 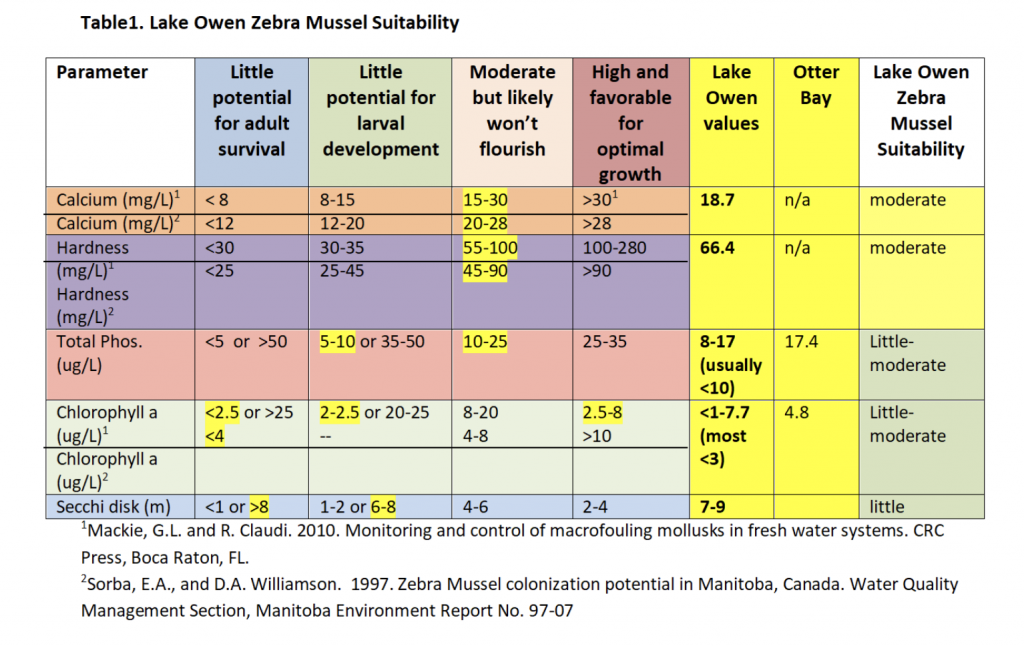 Calcium is important for zebra mussels to complete their life cycle. According to the Macki and Claudi 2010 article, the Lake Owen calcium value of 18.7 mg/L is in the moderate range, a level where zebra mussels are not likely to flourish. The Sorba and Williamson thresholds put Lake Owen’s calcium level of 18.7 mg/L in the “little potential for development” range. According to an analysis of several zebra mussel calcium threshold studies by the San Francisco Estuary Institute, “there is little evidence that zebra mussels can become established (complete full life cycle) at calcium levels below 20 mg/L” (Cohen and Weinstein, 2001).

The data from Lake Owen indicates that Lake Owen has a low to moderate risk of zebra mussel establishment. These parameters are not absolute indicators; zebra mussels have grown in some lakes (such as Lake Superior) with low risk for some of these factors, including limited calcium.

Adult zebra mussels can be monitored using plate samplers or cement blocks. Samples collected with net tows evaluate the presence of larval mussels known as veligers. We recommend continued monitoring using plate samplers at landings. In addition, we encourage lake residents to examine piers when removed from the water before winter for any suspicious mussels attached. Veliger sampling using plankton net tows is not recommended at this time. This is because of the lower risk compared to the cost and effort of veliger sampling. Veliger samples results are also frequently negative even when adult zebra mussels are confirmed in a lake.

Since little can be done once zebra mussels are established in a lake, reducing the chance for introduction through prevention efforts is important. We recommend continued and expanded AIS decontamination to reach the highest percentage of boats launching into Lake Owen as possible. Residual mussels can occur in ballast water of wake boats as well as in the live wells and/or bilge water of all boats.

Your membership in the Association can really enhance your life at our Lake while helping to protect and preserve our community now and into the future. It's easy and you can do it online!

This message is only visible to admins:
Unable to display Facebook posts

Error: Error validating access token: The session has been invalidated because the user changed their password or Facebook has changed the session for security reasons.
Type: OAuthException
Code: 190
Subcode: 460
Click here to Troubleshoot.
Go to Top