Fall Colors:  Fabulous Fall colors around Lake Owen usually peak from the 4th week in September to the 2nd week in October.

Grouse Hunting: The city of Park Falls boast that it is the Ruffed Grouse Capitol of the World. Rightfully so, our northwest woods is the ideal habitat for grouse.  Grouse numbers fluctuate on a 9 to 11 year cycle and last peaked in 2011.  The best grouse hunting is after the leaves fall off the trees in late October thru the first half of November.  Walking along logging roads seeded with clover and through young thickets of Aspen is the most productive.  Use either our right handed or left handed skeet barreled shotguns loaded with three 7 ½ shotgun shells.  Practice with a box or two of shells with our clay pigeon thrower.

Deer Hunting: Every year Wisconsin is ranked fifth in the total number of deer harvested.  Hunting Camp is a tradition in Wisconsin.  While the local deer management zone has an overall average hunter success rate of about 15%, Lake Owen based deer hunters greatly exceed that rate by many times, even in down years.  Hunting runs from the first Saturday before Thanksgiving to the Sunday after Thanksgiving.  The week before is spent baiting, sighting in rifles, and checking the trail camera photos.  Half of all bucks taken are shot in the opening week end.  The best hunting starts at sunrise and goes until lunch time, but local hunting camp records show deer are shot every day of the week and at all legal hunting times.  A bad day in the woods deer hunting beats a good day at work. 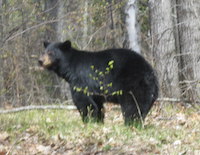 Bear Hunting:  Most of Wisconsin’s Black Bear population is in the northwest corner of the state.  It is estimated that there is one black bear for every four residents of Drummond Township.  It takes an average of 7 years in a row of applying for a Wisconsin bear hunting lottery before getting a harvest permit.  The biggest concentration of Wisconsin’s 20,000 black bears is around Bayfield County.  Bear hunting runs from mid-September to mid-October.  The deadline to apply for the lottery is December 10th.